Exhibition: GOING OUT OF CIRCLES. Housing estates and the production of images of themselves. Part 5 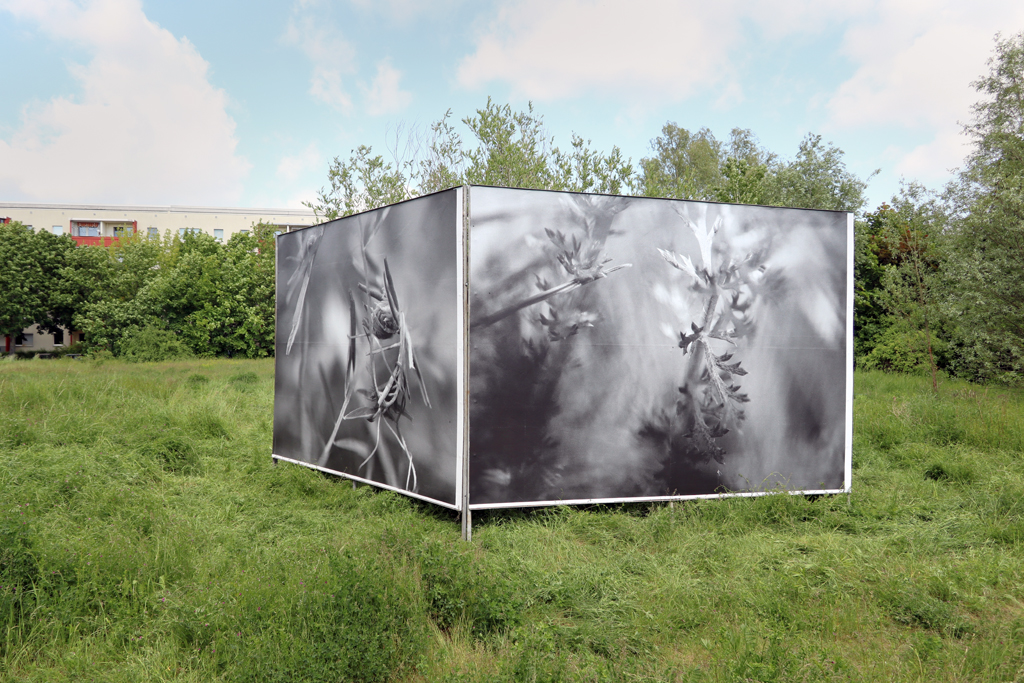 Countryside, Periphery, City
The fifth part of the series GOING OUT OF CIRCLES looks at how urbanity and the rural interconnect in the periphery. Culture, politics and science have long treated the city and the countryside as clearly separated opposites. This focus on their differences fuels the current rural-urban divide: it is accepted as being inevitable that the countryside shrinks to allow the city to expand. The legacies of this winner-loser duel are visible and can be experienced where city and country meet: in the periphery. Here, an ‘in between city-landscape’ has emerged whose residents know and understand both the urban and the rural to an equal extent.

Hellersdorf’s residents also possess this specific expertise. The Hellersdorf housing estate was built between 1980 and 1989 on sewage fields. It was positioned between the natural environments of the Wuhletal valley, the Hönower ponds, the Barnim plateau and the village structures of Kaulsdorf and Mahlsdorf. The interconnecting relationship between the housing blocks and the surrounding nature can be best experienced at a series of generous green spaces on the estate.

Depending on the political system and on the planning programmes of each decade, these green spaces have either undergone urban design or been left to nature. When the Berlin Wall fell, many of the green spaces planned during the GDR era on the estate were still earth and construction site mud. In the 1990s, EU funds turned the mud into parks in an attempt to prevent residents from leaving the estate. The exodus was unstoppable and was followed between 2002 and 2008 by the demolition of schools, cultural institutions and flats. This created earth and mud again, which then slowly changed from wasteland to green space over the next decade. One such green space today is the land that station urbaner kulturen has called »Place Internationale« since 2016 and uses for artistic activities and outreach in the district as part of an agreement between the local council and nGbK.

Over the decades, natural spaces on the estate have prevailed and the urban-rural tug of war ended as a tie. The »a lot of greenery« has emerged, which the residents unanimously describe as their »favourite thing about Hellersdorf«.

In recent years, this balanced situation has been challenged by major densification as part of the Senat’s »Growing City« building programme. The city’s first large ›land claim‹ since founding the estate on sewage fields was made in 2014 with the transformation of the Kienberg Hill into a venue for the IGA 2017 international garden show. Since then, many small green and open spaces have been released for housing. There are also plans for housing on Place Internationale, though currently on hold. Decisions on the next decade of urban and regional planning will be taken after the 2021 election. But how might a classification, an overlay and a further development of the urban green look like, especially in the light of Berlin’s housing and infrastructure shortage?

Set in this context, GOING OUT OF CIRCLES Part 5 reflects on Place Internationale’s past as green land and articulates visions for its future. Jochen Becker, Jesko Fezer and Madeleine Stöber take a new look at a concept developed for Hellersdorf-Nord by Atelier Lucien Kroll in 1994. The Brussels-based office for urbanism, architecture and information technology was commissioned by the WoGeHe municipal housing association to propose a way of dealing with the Plattenbau buildings and their outdoor areas which were in need of renovation at the time. Atelier Kroll developed an architectural and ecological toolbox to enable WoGeHe to react carefully and intelligently to all future changes on the estate from, in Kroll’s words, »4 July 1994 to 3 November 2019«.

A series of watercolour drawings by Eva Hertzsch and Adam Page continues the logic of their research project »Die Pampa lebt – Hellersdorf as a large housing estate yesterday, today and tomorrow« with residents from 2019 to 2021. By seemingly adapting Kroll’s 1994 concept to the current situation at Place Internationale, they depict the coming and going of buildings, commercial landscape and nature on the green space – from the 1970s to the future.

The project »Botanischer Garten Hellersdorf, Pflanzenbiografisches Institut« (Hellersdorf Botanical Garden, Plant Biographical Institute) by Sandra Bartoli and Silvan Linden investigates how vegetation grows on a specific 20 square meter section of the green land from May to October. For the duration of their observations, this section will be bordered off with five billboards on which changing photographs will document the growth and decomposition at regular intervals. The three artistic positions are presented on billboards.

Some of the work on the billboards will be changed every two weeks.

You can find the leaflet of the exhibition here[...]


GOING OUT OF CIRCLES
Exhibition series since May 2018
The visual arts and artistically informed urban research increasingly meet in the field of ›urban cultures‹. One way of exploring, experiencing and narrating urbanity and built space is through art. Large housing estates built between 1960 and 1990 are of particular interest for this field. Their scale is comparable to a small town – yet crucial urban functions such as culture and the arts are almost all located in city centers, not here. For this reason, large housing estates remain oddly foreign to many people in the city.

The exhibition project GOING OUT OF CIRCLES seeks to create new narratives and images capable of questioning the seeming homogeneity of housing estates and tracing their contradictoriness. How are stereotypes of a place formed? How are they attributed from the outside and accepted within the place? And can pictures of the periphery be created which do not impose an ›image‹ from the outside but rather create new circles in society through co-productions between residents and artists?