Symposium: SITUATION BERLIN #2. Towards a Manifesto of Urban Praxis 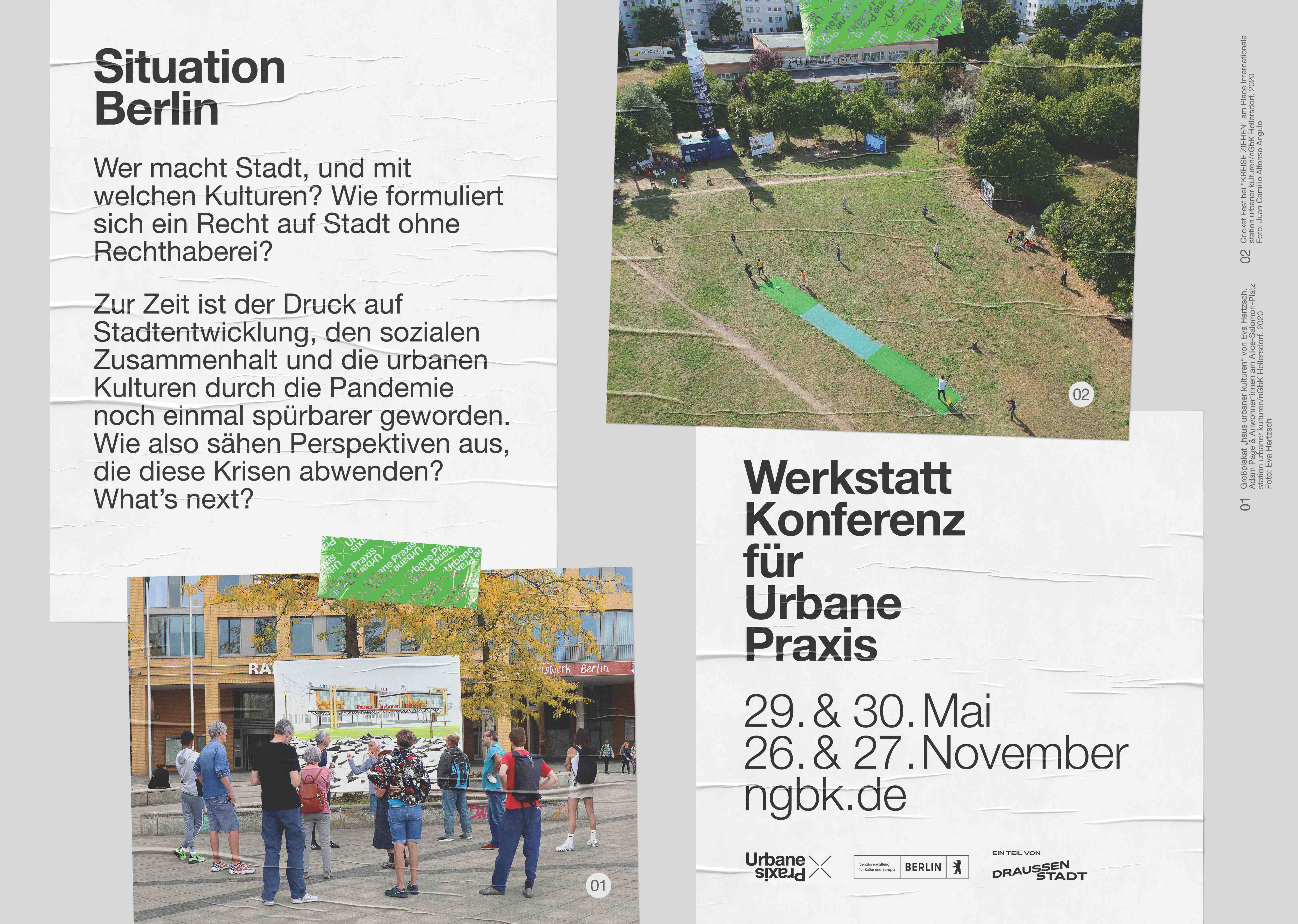 As a continuation of the »SITUATION BERLIN #1« conference held in May by the Initiative Urbane Praxis, a manifesto of urban praxis will be developed at the end of November as part of »SITUATION BERLIN #2: Towards a Manifesto of Urban Praxis«: Who makes the city and with which cultures and practices? How can the right to the city be formulated without dogmatism?

Berlin has long been characterised by independently initiated building projects, self-organised spaces and a rich social culture. The right to the city is fought for and made by many people by means of the arts, design, planning and actions – in short: by Urban Praxis.

Post-disciplinary »Urban Praxis« can be divided into three aspects: artistic and curatorial, urbanist and planning-based and design and construction-based, and socio-cultural and activist practice.

The city of Berlin has a large number of experienced actors from the field of »Urbane Praxis« who do not only do actions in public space. Rather, urban praxis is an independent form of city making often based on many years of expertise, which demands a constant project logic and also a steadfast consistency. In the course of the sometimes crisis-ridden developments of the city, this expertise must drive processes of change, especially in the long term, and not only through occasional project funding.

At the suggestion of the Rat für die Künste (Council for the Arts), the Initiative Urbane Praxis was created in 2020 with Berlin-wide project partners in order to develop new structural proposals for these challenges at the interface of civil society actors, administration and politics. The Initiative Urbane Praxis is contributing to cultural change in Berlin in order to find out what kind of city we want to live in together in future.

In continuation of the Urban Cultures conference (2019) and as part of the Initiative Urban Praxis, the neue Gesellschaft für bildende Kunst (nGbK) organised two workshop conferences in 2021 about the SITUATION BERLIN. The first part, »SITUATION BERLIN #1«, took place at the end of May 2021 at a range of Berlin campus project locations. Besides historical reflections, new ways and practices for stabilising urban praxis and urban cultures were elaborated.

In preparation for the second issue, »SITUATION BERLIN #2: Towards a Manifesto of Urban Praxis«, a printed, bilingual Glossary of Urban Praxis is now being made. On the one hand, the aim is to sharpen our understanding of »Urban Praxis« through the diversity of those involved, and on the other hand to elaborate its central criteria and qualities. It is a matter of inscribing its potentials into the urban discourse by means of its artistic, creative and activist procedures.

A jointly developed manifesto will become the urban strategy that is needed to lead us toward a meaningful urban praxis and to determine the answers to the following questions: How can new forms of living together in the city be implemented that draw on the hidden histories and fragments of the past, address current problems and orient themselves towards the future? How can approaches to this be guided and consolidated in structural and institutional ways without becoming fossilised?