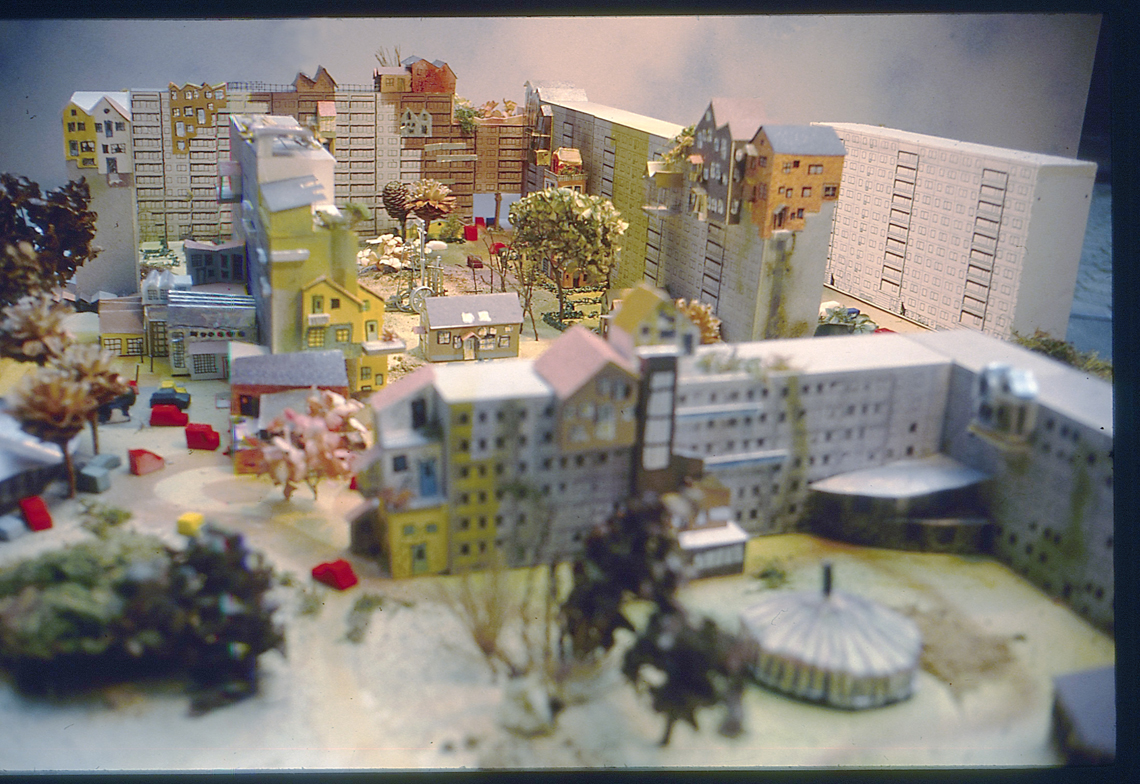 The exhibition is dedicated to the Belgian architect Lucien Kroll, who celebrates his 95th birthday on March 13. In addition to historical visual material and current photographs, the accompanying publication Lucien Kroll in Hellersdorf features texts translated from French for the first time. The exhibition becomes a constructive building site, just as Kroll had hoped for the entire neighborhood.

In 1994, at the invitation of the housing association WoGeHe, Lucien Kroll and his Atelier d'Urbanisme, d'Architecture et d'Informatique (Office for Urbanism, Architecture and Informatics in Brussels) were to rethink and transform the large-scale estate formats of Berlin-Hellersdorf. This was part of an ultimately unfinished redevelopment of the estate, accompanied at the time by numerous art projects.

Kroll's 1994 design exemplarily expresses a vision for the future of large housing estates on the outskirts of our cities which has not lost any of its relevance. Atelier Kroll developed an architectural and ecological toolbox to enable WoGeHe to respond carefully and intelligently to all future changes in the large housing estate over the following 25 years. He proposed grading the settlement in Berlin-Hellersdorf in phases from 1994 to 2019, flexibly redesigning the apartments, and establishing the courtyards as communicative places. He also proposes a new approach to the "Plattenbauten" and their outdoor areas. Additionally, self-defined extensions by residents were supposed to make the housing estate more and more sprawling.

In 1996, a small documentation brochure was published by L'Harmattan, Paris, and only in French: ENFIN CHEZ SOI, Réhabilitation de Préfabriqués (FINALLY AT HOME Rehabilitation of Prefabricated Buildings). Few documents and the book by Kroll, published so far only in French, are thus the remaining evidence of the planned redevelopment. In the estate itself, only individual decorative elements were realized. The basic idea of "incrementalism" – a considerate change of living conditions in consultation with the residents – is still waiting to be implemented.

The exhibition becomes an exploration station that grows with the findings and on-site conversations with people involved at the time. A picture essay by photographer Arne Schmitt (Cologne/Zurich), the design work of graphic artist Madeleine Stöber (Berlin), and contributions by Jochen Becker (station urbaner kulturen) and Jesko Fezer (Studio Experimentelles Design, Hochschule für Bildende Künste Hamburg) contextualize Lucien Kroll's plans in the present. The exhibition architecture is developed with the support of the Kooperative für Darstellungspolitik. A publication in the adocs Verlag Hamburg in cooperation with the Verlag der nGbK will bring the results together. The publication is funded by the Senate Department for Culture and Europe.