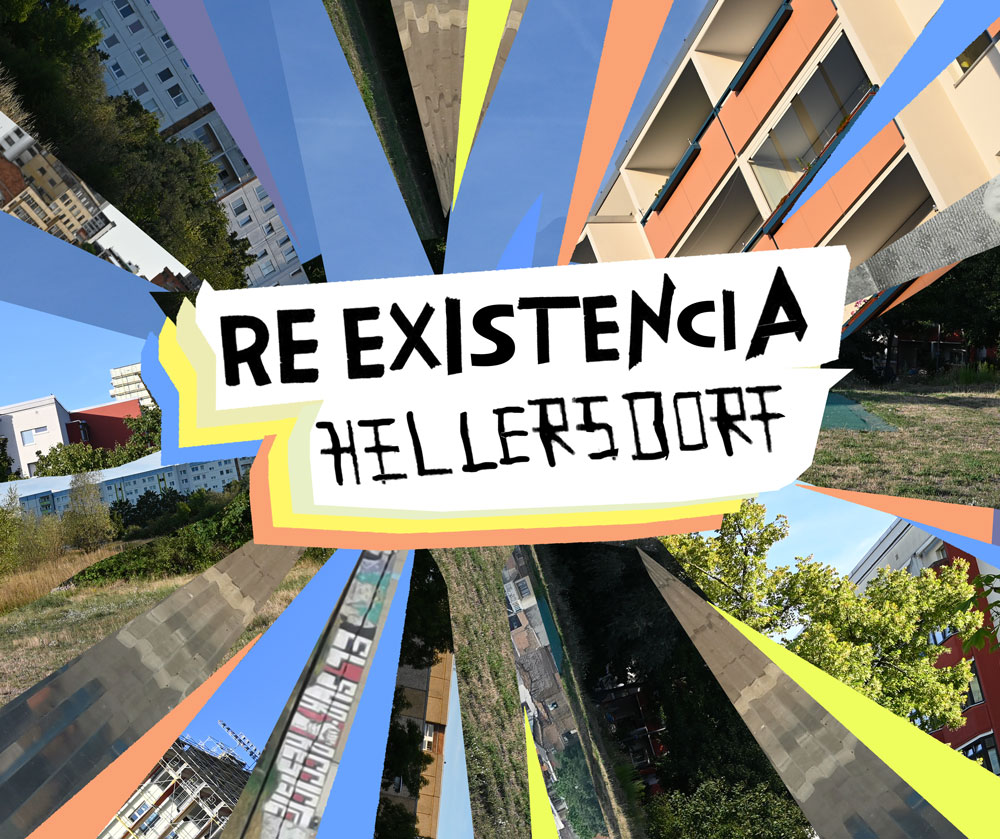 
The collective rampe:aktion invites the public to a video walk and performative exploration of the neighborhood around the green land Place Internationale of the station urbaner kulturen/nGbK Hellersdorf.

The action day takes place in the context of the project re-existencia Hellersdorf. In it the group rampe:aktion will test the translatability of concepts and practices of urban resistance from Latin America in the urban periphery of Berlin on the green space Place Internationale and in the surroundings of the station urbaner kulturen/nGbK Hellersdorf in September 2022.

The project is being developed following and as a continuation of a series of workshops initiated by Carolina Pinzón Rivera and Christian Diaz Orejarena, which took place in Colombia at the beginning of 2022. These activities and film recordings that where produced there are the starting point for experimental film actions in and with the neighbourhood of Hellersdorf.

Under the title re-existencia Hellersdorf, rampe:aktion explores with filmic and performative means, between poetry and action, what connects the struggles for self-determination here and there and what separates them. For this, the group borrows the Latin American concept of re-existencia. The term was used by participants in the workshops in Colombia as an alternative to the concept of resistance. In decolonial theory, it is used by theorists to describe the intention to break through entrenched modes of perception, to decenter colonial logics of capitalist rationality and to shape one's own living environment in a transformative way. In the search for resistant stories and personal perspectives on life and the current conflicts in and around Hellersdorf, the project takes the term re-existencia as a motto to ask: Are decolonial concepts from the global South applicable in the urban, global North? Are there concrete examples, actions and actors to which the concept can be applied here? What social and visual connections can arise here in audio-visual experimentation? And what mutual modes of perception shape the relationship of residents to activities à la rampe:aktion?

The audio-visual experiment re-existencia Hellersdorf will be shown at the end of November/beginning of December in a film installation in Hellersdorf.

The project is guest at the green land as part of the program curated by the project group station urbaner kulturen.

Funded by the Federal Government Commissioner for Culture and the Media